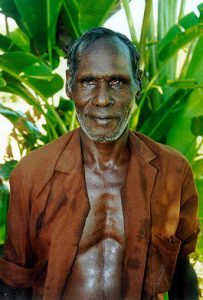 Peter Minygululu was born in 1942 at an isolated camp in the bush.  He has had no formal education but became a fully initiated man after a series of age-grading rites in which he was gradually taught the secret and sacred myths of his tribe, and the law and discipline which was to govern his future life. Minygululu lived most of his early life on the banks of the Arafura Swamps near Ramingining, among such traditional artists as his grandfather, the late famous bark painter Nhulmarmar and his father in law, George Milpurrurru, now equally famous.

Peter is not a prolific artist, and mainly paints barks for special ceremonies.  Quiet and withdrawn, he has two wives, an old woman and a much younger one who was promised to him when she was just born.  He is too shy to live in town, and wanders from camp to camp, staying with each group for a short time and then moving on.  He always paints subjects of great historical and religious significance, such as the Wagilag Sisters, and camps beside the sacred Mirarrmina waterhole when he paints this myth, so that he is in close touch with the great python Witig and can renew his spiritual links with important Ancestral Beings such as the two sisters.

There are not many traditional artists still living who are allowed to paint the Wagilag myth, and his style of painting cannot be copied by any other artist.  He also paints the totemic black headed python of the Arafura Swamps. Recurring images in Minygululu’s paintings are of itchy catillpilers and the two-headed snake (Mitukul or Mayku). This two-headed snake is one of the snakes that spoke to Wititj (the Olive Python) and was involved in the Conference of Snakes in the Wagilag Sisters Story. This two-headed snake is also represented in Minygululu’s paintings as Mayku the sacred tree at Mirrngatja.

Minygululu contributed Dupan (Hollow Logs) for the 1988 Aboriginal Memorial, an installation of 200 Dupun commemorating the deaths of indigenous people since white occupation. The installation was exhibited at the Biennial of Sydney- beneath the Southern Cross, before moving to the National Gallery of Australia as a permanent display. His ceremony is badurru (hollow log), similar to that of the Liyagalawumirr clan. The presence of two goannas entering and leaving the hollow log in some paintings signifies the men’s ceremony Djungguwan.

In 2005 Minygululu made his self-titled character in de Heer’s Award-winning film 10 Canoes. The film was a great success and aided in educating the world about Yolngu culture in Ramingining, central Arnhem Land.