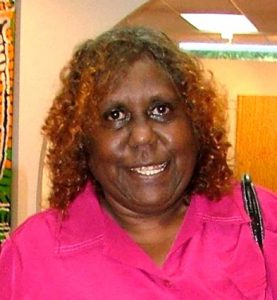 Lanita is from Sterling Station which is Anmatyarre country near Alice Springs and Tennant Creek in the Northern Territory of Australia. She was born in the desert homelands and doesn’t know her birth date. She is now living in Darwin along with her sisters Caroline, Jacinta, Louise, Selina and Sharon, also talented artists. The sisters were all taught to paint by their mother, Barabara Mbitjana and their famous aunties, Kathleen and Gloria Petyarre.

A painting of Lanita’s was presented to Princess Mary O’Donnell and Prince Frederick of Denmark as a wedding gift by the Danish community of Darwin NT.

The style of artwork belongs to her desert people of Central Australia. Her art themes represent body markings for women’s ceremonies and stories of hunting and gathering in their traditional country.

Aboriginal women have their own ceremonies in which a series of song and dance cycles tell of the Ancestral Beings who walked the earth teaching women’s law and ceremony to isolated groups living throughout the desert. Each tribe has its own set of women ancestors with different stories, designs and dances, but most of the ceremonies have one theme common to all groups, that of food gathering as the most important part of women’s lives.

2018 Stories in Shades of Blue at Japingka Gallery. Fremantle. WA