The Aboriginal artefact Hunting Boomerang is as interesting as the people it served. It’s uses are wide and varied, and to the Aborigines it was a highly prized possession. It is a non-returning boomerang and as such, its ability to kill was outstanding. Not only was this boomerang used to hunt game. But it could be used to create fire, ans as a digging implement and finally as a musical instrument. At a corroboree this boomerang would be used with another one, “clapping” them together to accompany song and dance. They could also be tapped on rocks or the ground. Or simply drawn across one another to provide a distinct sound. 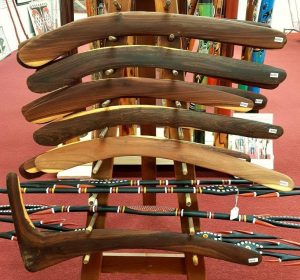 This boomerang could be thrown in many different ways. It could be thrown horizontally to the ground with great force. Thus skipping off the ground making it difficult for those on the receiving end to know which direction it would take. In warfare, the boomerang had the ability to cause severe wounds and in some cases death. Some of these boomerangs would measure up to two meters in length. When thrown at an animal, they had the capability to break the legs of its prey.

Although used in warfare, this boomerang’s most common use was in hunting food. It would be thrown into a flock of birds with the chance of bringing down more than one. It’s versatility to dig for water, clear fire sites, unearth honey ants and lizards. Furthermore they can cut open animals and chop them up. They are also used to scrape hot ashes from baked animals. This versitility made the hunting boomerang invaluable.

How the Hunting Boomerang is made

As with other boomerangs, this one was also dependent upon the shape of the root of a tree to give it strength and shape. In Central Australia, Mulga Wood was most commonly used. In other areas, Black Wattle, Bat Willow, Needle wood or Mangrove were the choice wood. Depending on the area, boomerangs from these regions are painted with ochre. And decorated with incised designs representing totemic clans and travels of spirit-heroes. Alternativelt the nunting boomerang can be left in the natural state.

Hunting boomerangs are an extremely popular artefact. They come in different designs and sizes. In our gallery we have many available. If you would like to enquire about the hunting boomerangs please get in touch through our contact us page. Alternatively you can explore the other artefacts we have on offer, on our artefact page.