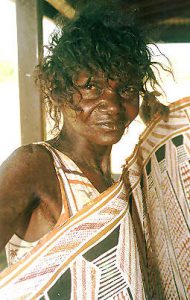 Dorothy was born in 1942 at Murrwangi near Mulgurrum, on the edges of the Arafura Swamp.Her father, Nhulmarmar was a famous bark painter who works hang in major art galleries and have been featured in authentic art books.

The family crossed from the mainland over to Milingimbi Island, where the Methodist Mission had established a school. The superintendent recognised Dorothy’s artistic talent, and encouraged her to paint in the western style, but after school each day her father and her uncle taught her to paint on bark in the old traditional way, using natural ochres and bush brushes. They did not, however, pass on any of their sacred designs to her, as the recording of the history and religion of the tribe is regarded as “men’s business” throughout Arnhem Land.

After completing school she went back to the mainland with her family, and helped build the stockyards and muster cattle on foot at Ramingining, then moved to Maningrida, about 200 miles distant, to marry her promised husband, an old man. For a while she was employed in the bakery, but moved back to Ramingining when her husband died. After a while she met and married Djardi Ashley, a well-known bark painter, who encouraged her to paint.

Her old father, Nhulmarmar, was becoming very worried because he had only one son, George Milpurrurru, to carry on his designs and stories. He consulted with the elders and eventually obtained their permission for Dorothy to be allowed to paint the traditional designs so that there would be a better chance of the art and sacred stories of the Ganalbingu tribe being kept alive. In this way she occupies a special place in Aboriginal art in that she has been allowed to paint designs normally taboo to women. Within these designs and traditional religious stories she has developed her own unique style which separates her from other artists. Her style and “hand’ are much admired by Aboriginal people and Europeans alike. She exhibits an inner strength which underlies the power of her own character, enabling her to continue to paint through the years despite social pressures often exerted to keep her in her place.

Recently a well-known male artist joked while viewing one of her Flying Fox paintings, “That Djukulul, she paints just like a man”. Dorothy has had several exhibitions of her work and has been written up in authentic art books. Her paintings are eagerly sought after by discerning collectors, and some of her paintings have fetched up to $15,000.