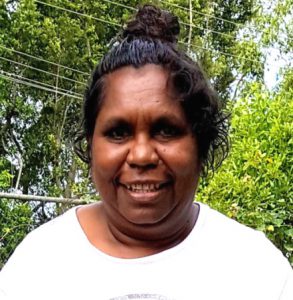 Selina Kamprina is an Anmatyerre artist and one of six sisters and three brothers who lived at Ti Tree, 190km North of Alice Springs in Central Australia. Her mother is Barbara Mbitjana (Other names: Pananka or Price). She attended primary school at Stirling Station, a cattle station near Tennant Creek where she began painting at a young age, taking guidance from her world famous aunties Gloria and Kathleen Petyarre. She later studied at Yirara College in Alice Springs. After her studies, she returned to Stirling Station working with the Community Development Program. In 2000 the Numina family moved to Darwin where they still live today.

Selina and her five sisters, Lanita, Jacinta, Caroline, Louise and Sharon Numina also well respected artists from Utopia, share many totems including the Bush Medicine Plant and she expresses their connection to the plant in a similar painting style to their famous Aunty, the renowned artist Gloria Petyarre. Selina first began painting the Women’s bush tucker dreamings when she was a young girl. Aboriginal women have their own ceremonies in which a series of song and dance cycles tell of the Ancestral Beings who walked the earth teaching women’s law and ceremony to isolated groups living throughout the desert. Each tribe has its own set of women ancestors with different stories, designs and dances, but most of the ceremonies have one theme common to all groups, that of food gathering as the most important part of women’s lives.

2018 Stories in Shades of Blue at Japingka Gallery. Fremantle. WA