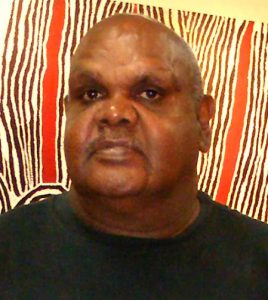 Sandy was born in Alice Springs in 1956, he is of Loritja tribe group and his skin name is Japanardi. His mother was born at Haastbluff in the Western Desert of the Tanami Desert. His father was born at Oodnadatta in South Australia. His parents passed away when he was 6 or 7 years old. He was one of the stolen generation children, taken to Croker Island (Minjalang) in Arnhem Land. In 1965 the mission was closed and Sandy moved to live in Darwin. In 1967 he was fostered out in Hobart (Tasmania) with adopted parents. In 1968 Sandy was back in Darwin and then down to Victoria with his new adopted family. Sandy completed his schooling in Darwin in 1970.

After Cyclone Tracy, he worked in various job in South Australia. After which he came back in 1980 to his place of birth in Alice Spring to find his real identity. Sandy spent a lot of time with the Elders of his immediate family to find about himself. He learnt Aboriginal art watching his family members (Uncles and extended family) in Alice Spring, Papunya, and the western desert area. Sandy has the permission to paint Kangaroo Dreaming, Emu Dreaming, Honey Ants Dreaming, Bush Tucker, Goanna Dreaming.