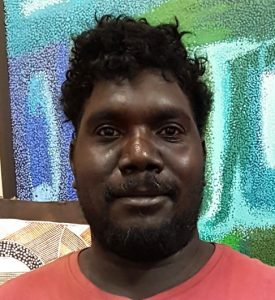 Obed’s father, world renowned artist Ivan Namarriki taught him how to paint the complex designs of crosshatching, (rarrk), appearing on the bodies of the creatures he depicts, using the brilliant colours which belong to the clan. The ochres are found in secret deposits in the ground, the white colour comes from a clay site in the bush, and black is charcoal from campfires.

Ivan and his wife Louise Dingawanga, a respected artist and weaver in her own right, have five children including Obed. As they reach young adults, they are taught how to paint on bark and Arches Rives paper, so that the stories handed down to him by his father Ivan and grandfather Peter Maralwanga (1917–1987), also a famous bark painter, whose works hang in major art galleries and museums, will never die out.

He still hunts and fishes in the traditional way and has great obligations on him to look after members of his clan including his children. It is incumbent on him to keep painting to supply all their needs and-to keep improving his outstation. He helped his father grub out the trees by hand to form an airstrip and to erect a windmill on the banks of the freshwater creek not far from his camp and is anxious to improve the living conditions of his extended family by building houses better than the bush shanties and corrugated iron dwellings that he once lived under at Marrkolidjban and his outstation Kumurrulu.