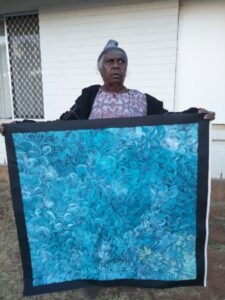 Margaret’s mother is sister to the father of the famous Gloria Petyarre, and Ada Bird Petyarre and more notable was sister to late Emily Kngwarreye, the noted artist from Utopia. Her subject matters involve “Honey Ant Dreaming” as well as Mountain Devil Dreaming. or just an abundance of moving brush-strokes giving you the impression of moving leaves in the desert. She is a self-taught artist who lives in Alice Springs with her husband, Tommy Johnny and their three daughters.

As a tribal woman from Utopia, Margaret has been painting for most of her life on her body before ceremonies and on ceremonial objects. The body-paint designs are learnt whilst applying paint to the chest, breasts and shoulders of women about to partake in ceremony. These images relate to her Awelye (dreaming) and are significant to the ceremonies and rituals that are the basis of her culture. Margaret Scobie was born in 1948 at Woola Downs, Northern Territory. Margaret painting is in her “blood”, she was destined to be an artist as her family contains a string of credited artists. Margaret was born in Woola Downs, Northern Territory, and was schooled at Ross Park Primary in Alice Springs. She now lives in the Central Desert with her husband, Tommy Johnny and has three daughters and one son, along with three grandchildren. There is a rich artistic tradition that runs in Margaret’s family, and she is related to many well-respected artists. Gloria Petyarre is her first cousin and Emily Kngwarreye her aunt. Both have achieved national and international recognition. Her subject matter involves spinifex and body painting. This painting depicts flowing spinifex grass as it is blown by the wind. The paintings are based on body painting designs, which are used in important women’s ceremonies. Margaret often paints using an array of colours.

Collections:
Margaret Scobie work is represented in private collectors in Australia and Europe.