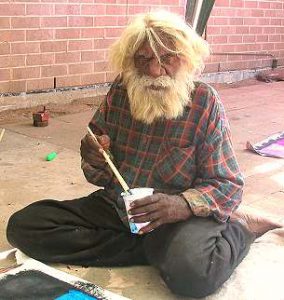 Kuddtji, born around 1928, is one of Australia’s leading Aboriginal artists who began painting in the early eighties after the art movement at Papunya was inspired by ” Geoffrey Bardon. He is custodian of his country situated approximately 230 kms north east of Alice Springs. He is the brother of renowned artist Emily Kame Kngwarreye from Utopia. Prior to his artistic career he had numerous jobs through out the Central Desert as a stockman and also worked in minera1 and gold mines. He has been represented in major international exhibitions and has gained world wide recognition for his traditional depictions of his dreamings

Dreamings, telling of the travels and law of the Emu ancestors. Starting in 1986, his precisely dotted Emu Dreaming paintings, featuring ranks of coloured roundels and other ‘hieroglyphs’ on a chequered or dotted background, became sought after by major galleries in the Northern Territory. Breaking out of this style after some years, Kudditji’s work became far looser and more ‘abstract’, and some commentators have seen a strong similarity with his sister Emily’s work – but it is not clear who was the first to set out on this path. The demand for his earlier, detailed style, however, moved Kudditji to return to it, and it was only in 2003 that he began to exhibit the extraordinary, saturated colour paintings that have seen his reputation grow nationally and internationally.

The new paintings, in fact, have several styles, and Kudditji has explored size of canvas as well as form in these intense, beautiful works. A sense of immense space can be felt in the “My Country” paintings, where massive blocks of stippled colour are laid alongside each other, sometimes using only two colours, while in other paintings a quilt of juxtaposed colours produces a landscape effect.

Geoffrey Bardon, speaking of Papunya artists, writes that they “dreamed [their] marvellous spirit-place back” so that “the land became a great song of the place where a spirit could be in its own supernatural grace; the ‘My Country’ (Homeland) Dreamings were the painters’ affirmation of both themselves and their ancestors” (Papunya, p.54). Clearly, the same can be said of Kudditji Kngwarreye.