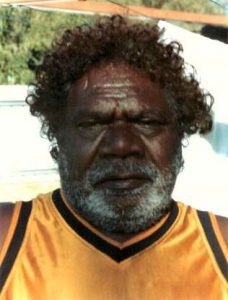 “Going to the source”,
2004, April 20th, The Australian
By Nicolas Rothwell

THIN hands reach above the ox-blood expanse of stretched canvas, touching, stroking, defining space. Then, in black paint, with slow, steady pressure, George Ward Tjungurrayi marks out a set of interlocking planes. He ignores the blowing dust, the camp dogs scratching at his side, the hum of Pintupi voices, the coming and going of women and children in the Kintore painting compound. He lies on one side, wearing a well-worn red and black beanie. All day long, his arm moves at unvarying speed, as his design – his dream, his law – takes shape.

Ward, who received the Wynne Prize for landscape painting earlier this month, is a reticent and silent Western Desert man. This cast of character can cause the odd practical problem, now that he’s become one of the nation’s most admired, and most keenly collected, artists: he’s not at home in English; sees no merit in photographs; is uneasy in big, bustling towns like Alice Springs. “I’m a bush man, me,” he insists, with a distinct, proud edge in his voice.

Ward was born, probably in the early 1950s, near the spot where the remote West Australian bush community of Tjukurrla lies today. His father died while he was still very young. It was only in his teenage years that he first encountered Europeans, when a commonwealth welfare patrol came upon his family group camped by a desert waterhole. After travelling to the government settlement at Papunya, first home of the desert painting movement, Ward worked briefly as a fencer and a butcher in the community kitchen. He also met and married his wife, the somewhat formidable Nangawarra, a member of one of the desert’s most dominant families. Once their first child was born, the couple moved west to Warburton, then on through the ranges to Docker River, to Warakurna and at last to the newly established Pintupi capital of Kintore, in the looming shadow of Mount Leisler, where they still spend time today.

It was here, just over a decade ago, that Ward first painted on canvas: a handful of elegantly “classical” concentric roundel works from that time survive. But it was only over the past three years, after the death of his brother, Yala Yala Gibbs, a celebrated artist, that the responsibility to paint fell squarely on Ward’s shoulders. By this stage, he was a senior desert man: he lived deep in the world of law. The canvases he began producing for Alice Springs-based Papunya Tula Artists were like nothing else that had come before in the desert art movement: sombre, cerebral, full of grave intellect.

National Gallery of Victoria indigenous art curator Judith Ryan quickly caught their splendour. “He hit on this sophisticated, geometric, filled-in style almost at once,” she says. “I have the sense that he began to paint only when he was ready, in full command of both story and country – and he seems able to harness considerable power and visual energy almost every time he approaches a large canvas.” Once Ward has blocked out his painting’s various fields, he fills each one with parallel lines, tight-drawn. They have the feel of contours, making up recurring patterns: wavy paths, tilted circles, chevrons. This underpainting process can be protracted. The work still bears no resemblance to its final form. Then he takes up his dotting stick. A transformation begins. At last, after several days of meticulous detailing, the shimmer of the finished surface begins to show.

Ward’s large-scale works depict the ancestral desert narratives, relating to the country west of Kintore – above all, the snake-rich landscapes around Lake MacDonald. But they are not maps, as much as expressions of a world, a logic, a sense of how space is enlivened by spirit.

Just as the creation journeys they refer to operate on many levels, so do the paintings: to the outside eye, they possess an austere beauty; when explained in detail, they can serve as visual cues to a complex story-system; but all the while their air of coherent depth comes from the underlying mental architecture of the desert world.

This particular canvas, as the artist explains while painting, refers to an elaborate story, also encountered in the works of various senior Pintupi figures, most of whom have passed away. It describes journeys taken by the Tingari ancestors – men, women, children, dogs – who once moved through the landscape, but are all transformed, now, into rocks, or water-snakes. A cataclysmic storm fell down upon them: black clouds, rain, lightning. Gradually, a complex narrative emerges, which involves shifting of shapes, claypans formed by nose-blowing, descent of figures from the sky. Many things are said of Ward’s canvases, both by him and by his immediate family.

Ward’s brother-in-law, Frank, for one, advises that the artist paints some canvases in a pinkish palette because the colour feels “strong and balanced”, while the black colour is chosen because it’s “good and healthy”. Then again, black and pink stand respectively for winter and for summer landscape, and much more. Western eyes interpret differently, and notice other things. Anita Angel, curator of the Charles Darwin University art collection, and a prominent collector in her own right, greatly admires Ward, while gauging his paintings largely in formal terms. “It’s instantly recognisable, he has a style, but it’s more than just a style,” she says. “He’s coming from somewhere deep within his mind’s eye to draw out what he does. He’s not experimenting, he knows exactly what he’s doing; he has something to say about what he sees, and feels, and knows.”

Angel suspects a connection between Ward’s spare imagery and the incisions made upon the material objects of desert culture: ritual items only vaguely known to outsiders. This obscure, shielded element that so clearly lies within Ward’s work makes all the more striking his strong appeal to serious collectors of contemporary art. Melbourne gallerist Gabrielle Pizzi, who has included significant pieces by Ward in four recent shows, believes his work can jump the cultural divide because of his capacity to fuse the desert tradition with an individual, almost private quality. “He’s got it,” she says, “both the Pintupi grounding, and the genius to paint in ways that are innovative and exciting. He takes desert painting to another level. In the gallery people stop still in front of his works. They respond to the power, the purity and the intent.”

The NGV’s Ryan also sees a continuing tradition beneath Ward’s novel surface. “The aesthetic’s changed, the style has changed, the art’s concept remains the same,” she says. “It’s refined and refined over many layers, and that gives it a reverberative shimmer, a final precision of detail. Art of this kind has immense potency. It’s not difficult at all for today’s collectors to have a passion for it, because it’s minimal. It’s towards the minimal edge in terms of design, and in its lack of figuration and restricted palette.”

A week has passed. The painting is complete, its structure so majestic and interwoven it seems to outreach the eye’s capacity to see. Ward leans back, and glances down; but the artist’s face is quizzical. He makes his trademark shaking movement with his painting hand. He adjusts his beanie, his long-sleeved shirt and close-fitting trousers, summons his dog-pack, and walks away. Behind him is his painted mirror of the desert: it lies gleaming on the dusty ground.