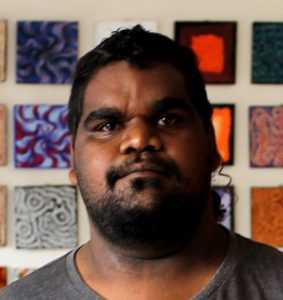 Elton is the son of Doris Abbott, a Western Aranda woman from Ntaria (Hermannsburg) and Kevin Wirri Tjapaltjarri who is Pintubi/Luritja. Elton grew up in Kaltukatjara or Docker River situated some 200km West of Uluru next to the Western Australia border. Stretching West of Docker River are the Peterman’s Ranges that Elton explored extensively with his father who mentored him with watercolour technics.

Elton watched his parents paint and showed a keen interest to paint watercolours like his father. Right from the start he showed a lot of skill, and with some instruction from his father is now an artist in his own right. He has a great eye for detail and colour. As well as pursuing his interest in watercolours, Elton is also developing his skills in acrylic painting and has produced a number of works in this medium, including portraits combined with landscape. His interests have extended to theatre and he performed in a sell-out production of the show ‘Ngapartji Ngapartji’ at the Melbourne International Arts Festival in October 2005. Another performance Elton participated in is the award winning ‘Namatjira’ play that toured the country between 2010 and 2012. Elton now lives in Alice Springs. The delicate grey gums and ochre mountain ranges evoke the European-style watercolours of his tribal grandfather, Albert Namatjira.

The West MacDonnell Ranges is one of the oldest rock formations in the world. Its decaying ridgelines stretch from Alice Springs, pointing to a land where the spirits are still masters of all. It is a mythical place and the home for eternity to the Arrernte people. For the rest of us, it is the landscape of the Red Centre. The geography is beautiful and rugged—sheer cliff faces give way to sandy, dry riverbeds. The climate has all the extremes one finds in a desert; searing heat and freezing nights, yet, life abounds everywhere. Survival in this land is about knowledge—naivety in this place rarely ends well.